With a distinctive voice and powerful storytelling, singer-songwriter Hannah Scott leaves a lasting impression on her audiences. Ahead of her performance at our final summer sounds session next Saturday, we spoke to Hannah about what we can expect from her show and how it felt to have her music featured in the popular TV series, Grey's Anatomy.

How would you describe the music you create and what can we expect from your summer sounds show?

Over time I have come to describe my music as contemporary folk - the songs tell stories but the melodies and production are not traditionally folk. People often say I have a distinctive voice and are able to recognise my songs from my voice!

I will be playing this show solo, so it will be me singing these songs, accompanying myself on acoustic guitar and piano.

When did you decide that you wanted to pursue a career in music?

When I left university at the age of 21 I thought I’d “give music a go for a couple of years” and if it didn’t work out, fall back on my degree. I’ve been working as an independent musician for 15 years now and have come to see it more as someone I am, rather than a choice I make. I would not be happy doing anything else!

You work closely with your creative partner Stefano Della Casa. How would you describe your collaborative partnership?

I think the partnership works so well because fundamentally we are such good friends. We also bring skills to the table that the other doesn’t have - I sing and write lyrics while Stefano is a multi-instrumentalist and arranges and produces. We write the melodies together and between the two of us we can write and produce a song from scratch, often only needing a mastering engineer at the very end to finish the song.

Your song No Gravity recently featured in Grey's Anatomy. How did it feel to hear your song on such a popular TV series?

Incredible! I think both Stefano and I shed a tear! After all the years of hard work to feel like our music was considered good enough for one of the world’s biggest TV series was an amazing boost and it’s been lovely hearing from people across the world who wouldn’t have heard our music otherwise.

If you could open a show for any artist who would it be?

Sara Bareilles I think - there are lots of artists I would love to open for but she might just be my first choice - if you haven’t heard her music, check her out!

check out our full outdoor line-up

something for all ages and tastes 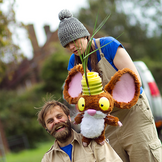