We're delighted to be welcoming The Cabinet of Living Cinema to the Maltings for the first time later this month.

Meet the talented group of artists performing as part of the #100 Years Tour: Enchanted Cinema.

Fiona is a multi-instrumentalist and solo artist who performs with a variety of acclaimed ensembles including The Mediaeval Baebes, Nueva and Tell Tale Tusk. She has performed her solo material at many notable events and venues such as the Union Chapel, Glastonbury Festival and Broadstairs Folk Week. She will be warming up for the Cabinet with songs from the 1920s.

Gareth started off his musical training as a classical and jazz pianist, then explored the world of community music. His interest with lady Harp spans two worlds; the folk tradition and spiritual practice, he has dedicated years to travelling across Britain, learning from the masters of the tradition. Gareth now brings to the fold Jazz recorder, English Concertina and the Northumbrian Pipes.

Camilo is the Cabinet’s percussionist who will be helping to create the rich tapestry of live effects in the scores as well as performing on his tablas prior to the performance, as part of the Gloaming Trail. He is part of experimental sound/ambient group Pataphysical and has toured with the likes of Talvin Singh.

Kieron is Creative Director of Cabinet of Living Cinema and composes their live scores in close collaboration with his band of trusty musicians. He has collaborated as a live cinema practitioner with Paper Cinema and Secret Cinema and as a theatre composer with Alexander Zeldin amongst other directors. He’ll be moving between flamenco guitar, viola and piano for the #100years Tour.

Reuben is an emerging theatre-maker and spoken word artist. He will be taking audience groups on the Gloaming Trail to three locations around the Maltings to hear poetry by Bertolt Brecht, Walt Whitman and Boscombe poet Eric Speight all inspired by our enduring muse - the sea.

#100 Years Tour: Enchanted Cinema will take place in the outside space in front of the building on Sat 17 July from 7.30pm. 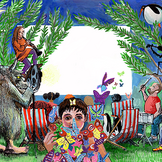